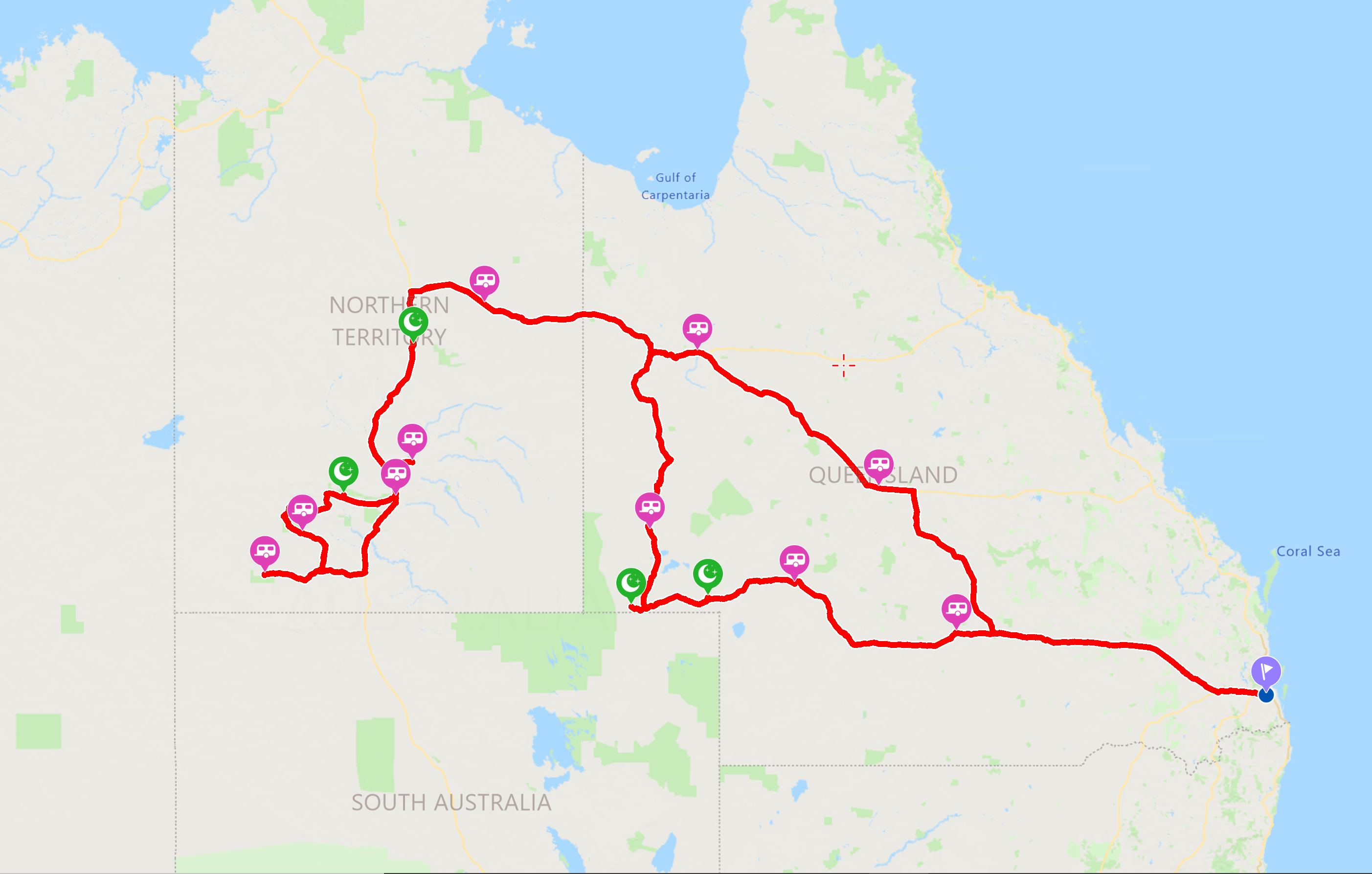 If you have been wondering why nothing has been getting posted here, it’s because of our highly anticipated holiday, 5 weeks in the great Australian outback.

I will make this a multi-part series of our trip, this being part 1.

Since we only had 3 days to get to the Big Red Bash the first day was a very early start. The general advice here in Australia is don’t drive at dusk or dawn since there can be Kangaroos, cattle etc wandering around on the roads, especially in the outback. We risked leaving Brisbane at this time as we needed to get to Charleville before dark on day 1, a massive 750Km. I figured the roads should be good condition, and being in a more urban environment we should be ok with the animals. Estimated about 8 hours should do it, plus rest stops.

We got to Charleville just before dark, set up camp then into town for a meal and to have a look around.

Early morning rise, quick breaky, and hit the road to Windorah. We certainly weren’t the only ones heading to Birdsville, plenty of caravans, 4wd’s, campers going in the same direction. This became more evident when we got to Windorah where we had to queue up for petrol. Lucky for us, we managed to get into the campsite just before it got filled up.

It is here that we could definitely say we are in the outback of Australia. Off to the local pub for a meal and some beers, the meal was good but $10 a can was a bit steep, so that’s where that idea ended. BYO at the campsite.

From here it was on to Birdsville, according to Google this could be done in 1 day, about 420Km. As it is also the longest stretch of gravel road we will be driving on, we’re not too sure what to expect.

We also wanted to have a look at the Beetoota hotel, Australia’s most remote pub, but they have been having licensing issues with the local council so we were not sure if they were going to be open, and also what facilities are there for campers. Turned out all was fine, good facilities, they were open and to boot they had a communal BBQ/fire pit, bring your meat and they will cook it for you, also the beers were $5 a can, unbelievable considering how remote the place is. So we stayed the night, lots of people around, great night.

To keep up to date with what’s happening with the hotel have a look at their Facebook page.

On to Birdsville, then the Big Red Bash. From Betoota it was only about 200Km of dirt road, so not too long. We were also getting used to driving on gravel roads, our technique was to keep the speed to around 80Kph, let the tyre pressures down about 10 – 15 %, and try to avoid the occasional big rocks that just happens to be in the middle of the road. You had to keep the speed up, otherwise, the corrugations in the road would shake the car to pieces.

We had to get fuel in Birdsville, lucky our car is petrol, no queue, while the diesel boys were out of luck, big queues and the town ran out. Got our tickets to BRB, then onto BRB itself, we managed to get there and set up camp by 3 pm. Time to relax and have another beer, or two. BYO this time.

It was great to get this far with no mishaps, and we had a great time. The Big Red Bash was a great experience, well organised, friendly people. Even though there was a lot of people around it did not feel crowded, the campsites had plenty of space around them.

Until the next instalment.

This site uses Akismet to reduce spam. Learn how your comment data is processed.

no images were found